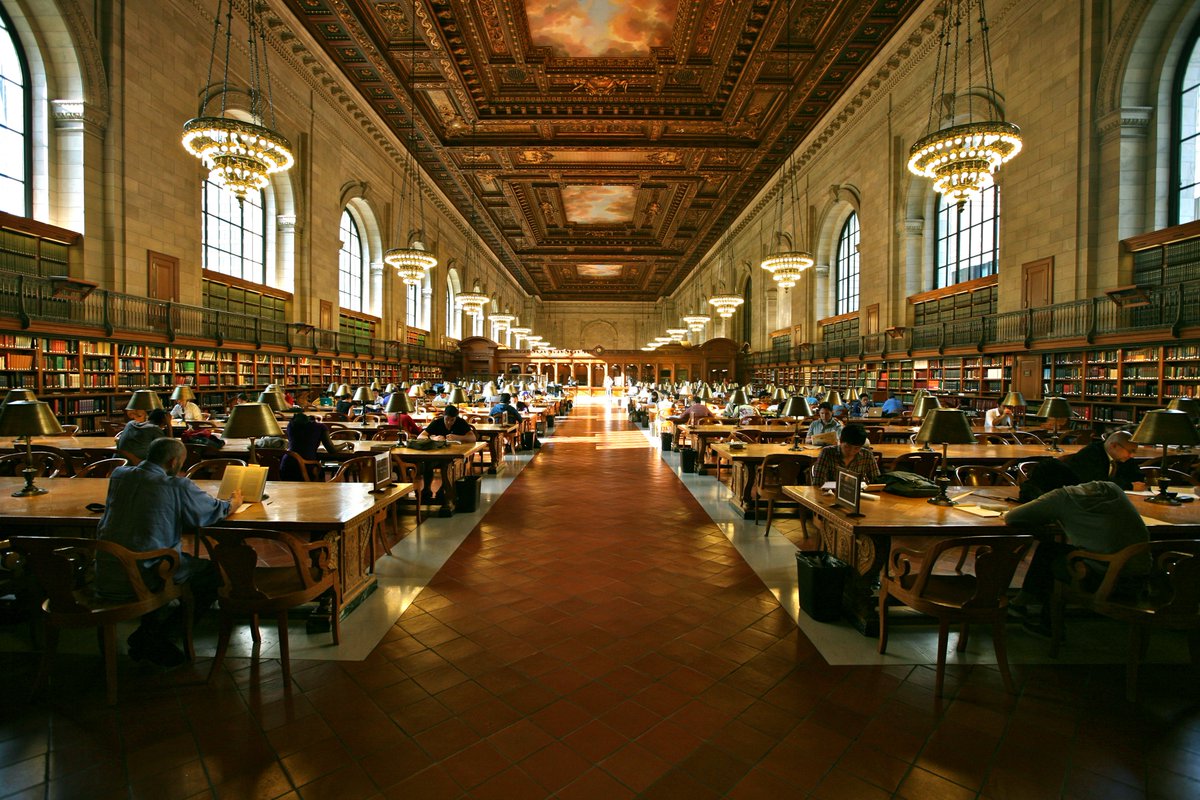 Libraries — especially those open to the public — perfectly embody the idea that education and culture exist as a basic human right, not the exclusive domain of the privileged elite. As such, they certainly play an integral role in keeping the species moving forward (or, at least, in circles that sometimes move forward) and ensuring the survival of important slices of history, culture, philosophy, science, math, and, obviously, literature. Thanks to the following institutions, both the shape of libraries and the world completely changed in large and small ways alike.

Seeing as how it inspired Alexander the Great and Ptolemy to build the Library of Alexandria, it’s safe to declare the Royal Library of Ashurbanipal — once located in the Assyrian capital of Nineveh — a game-changing institution. It boasted nearly 31,000 texts before its 612 A.D. destruction, and gifted the modern world with The Epic of Gilgamesh and a treasure trove of Assyrian literary, historical, political, and philosophical texts no longer lost to time. 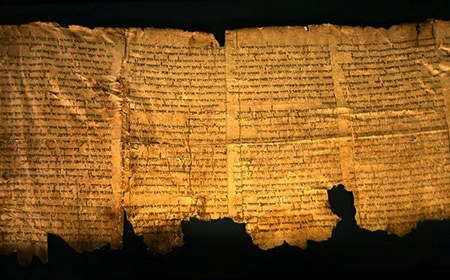 Probably one of most influential educational institutions of all times, this intellectual center of the Ptolemaic empire hosted works, symposiums, and studies by the likes of Hypatia, Euclid, Archimedes, Catherine of Alexandria, and more ancient thinkers and scientists still influential today. Before its hotly debated annihilation, the Library of Alexandria is theorized to have housed hundreds of thousands of volumes pertaining to literature, science, math, philosophy, history, civics, and other liberal arts topics.

Lucius Calpurnius Piso Caesoninus’ private holdings in Herculaneum mostly burned in the 79 A.D. eruption of Mt. Vesuvius yielded one of the most comprehensive collections of Epicurean philosophy in archaeological history. In addition, it also introduced scholars to the previously unknown works of Philodemus, unlocking a completely brand new area of inquiry for Classics buffs and a broader understanding of Roman thought.

From roughly the fifth century A.D. until almost the 13th, the library at Nalanda University housed the world’s largest repository of Buddhist and Hindu religious texts, inspiring students as nearby as other towns in the Indian state of Bihar and as distant as Greece. Thanks to the monks who ran the show, it contributed to the spread of both the practice and the understanding of two still-major world religions.

During the Islamic Golden Age, House of Wisdom in what is now Baghdad, Iraq, served as an epicenter of religious and scientific inquiry, and academics behind the Translation Movement, which converted Greek texts into Arabic, started up here. Caliph Harun al-Rashid launched the initiative, but it was his son al-Ma’mun who nurtured relationships with great thinkers in the arts, sciences, philosophies, and theologies and encouraged them to flock here and transform it into one of history’s most influential think tanks.

Thanks to the Crusades, the millennia of knowledge collected in the Imperial Library of Constantinople perished, but not before it could leave a major mark on antiquity’s greatest minds. Because many of the original Greek papyri began disintegrating over time, founder Constantius II decreed the staff to transfer them to a more permanent medium to ensure future generations of learners could pick up a few things from the past.

Since 1457, the one million volumes owned by the Central Library of Astan Quds Razavi headquartered in Mashad have provided deep insight into Islamic thought, history, math, and science. Over time, its collection of rare and ancient manuscripts has spread to 35 different locations all categorized under one heading, spread mostly over Iran, but also stretching as far as India.

Europe’s very first public library opened in Cesena, Italy, in the mid-15th century, inviting anyone wishing to peruse its wares and enjoy the stunning architecture; the citizenry did, after all, collectively own the extensive compilation of Greek and Roman texts and codices. Although the Islamic Golden Age likely launched the very idea of a public library, Biblioteca Malatestiana finally brought the concept to the “Western” world, which eventually spread thanks to the continent’s lust for colonialism.

Seeing as how Catholicism stands as one of the most influential political and religious forces in the world, it makes perfect sense that its holdings boast some rare, essential historical and philosophical texts in multiple ancient and modern languages, from multiple regions and eras. These include, of course, official papal documents and decrees. Since around 1475, it has grown to encompass multiple media and even offers up library science courses, and continues to attract scholars across disciplinary lines. 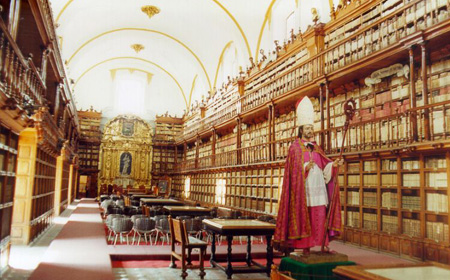 A plethora of French monarchs oversaw the establishment of the National Library of France, but it particularly stood out as a symbol of the bloody revolution. After being opened to the public for roughly 100 years, freedom fighters bolstered the collection with the spoils of slaughtered elites and encouraged the populace to seize knowledge and think for themselves.

Library of Congress serves as America’s preeminent research library and one of its most integral archives preserving national (and, to some extent, even world) history. All of the country’s copyrights (for books or otherwise) pass through here, and its filing system provides the framework for the majority of university and research libraries today; like many national institutions, it circulates a copy of every significant literary work published in the dominant language.

Nazi occupation saw Poland’s intellectual gem set ablaze, with hundreds of thousands of priceless books, paintings, musical compositions, and other cultural hallmarks destroyed in the name of hate. Since the end of World War II, however, it has rebuilt itself into the nation’s largest literary archive, offering up a symbol of hope, healing, and renewal for the ravaged Polish peoples.

As the official libraries serving one of the world’s largest, most prestigious research complexes, it makes perfect sense that the 20 facilities that comprise the whole stands as an incredibly influential, game-changing place. Thanks to its numerous digital holdings, anyone with an Internet connection can browse and learn a little something about most academic fields.

America’s second largest public library (and largest public library system) has received enough grants from the likes of Andrew Carnegie over the years, it simultaneously takes on a museum role; how many others of its ilk can boast ownership of a Gutenberg Bible? Since its 1895 inception, all branches, no matter their focus, have strived to reach out to local communities and promote history (particularly of largely marginalized demographics), science, art, literature, and plenty more.

Like the National Library of Poland, the Warburg Institute Library, which now calls University of London home, struggled mightily to preserve intellectualism and creativity in peril because of fascism, this time within Germany’s borders. Founder Aby Warburg intended for it to promote art history, anthropology, and other global cultural hallmarks, but partner and director Fritz Saxl had to quickly smuggle the entire collection out in 1933 lest it fall forever to Nazi suppression.

With more than 150 million holdings (14 million of these being books), this prestigious research library — along with the Library of Congress — exists as the biggest in the world; almost more of a museum than anything. As such, it provides a safe home to rare manuscripts, books, and other cultural items and allows locals and visitors alike to explore the world’s myriad curiosities.

Founded in 2000, Room to Read involves libraries of more than one single institution, but still holds quite the influence over the populace. The nonprofit builds libraries in African and Asian communities with few resources and finances, ensuring equal educational opportunities in corners of the globe ravaged by poverty, war, exploitation, and other human rights horrors.

University of Chicago boasts the very first almost fully automated library, which stands poised to revolutionize the industry and completely change the role of library science professionals over time. At the Joe and Rika Mansueto Library, users input the materials they need, and a robotic arm delves deep into underground archives to retrieve it — no getting lost in the stacks or commandeering a student assistant for help. Considering the massive expense involved, though, chances are this arrangement will take a while to dominate. 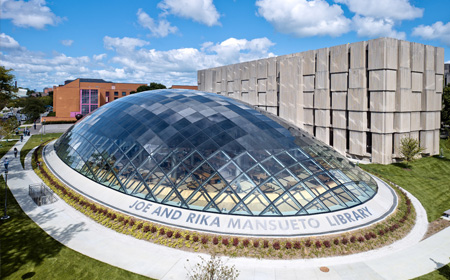